To Do Management with Evernote

The title of this post is grand, perhaps too grand.  It's really just a simple change I've made recently as part of my paperless office drive (which really should be called a simplify your life drive).

One of my torments has been todo lists.  While I generally am pretty good at using them it drives me batty that I don't have a consistent way to keep track of them.

At work I've used Outlook to-do's a lot but they are generally unavailable at home.  At home I've tried the built in mail to-dos as well as various services such as remember the milk and the ilk but I never found a solution that worked for me consistently everywhere.

Before I go too much further I should explain that the way I do tasks lists/todos is they tend to be associated with a bunch of other media -- For instance if I get a bill I need to call about during the week I'll scan it in (with my SnapScan of course) so I have a copy to refer to when I call.  Or I might have a screenshot or just a bunch of notes.

I've settled on a solution in the last 3-4 weeks that really seems to be working for me.  Evernote.

I have two notebooks, one is called 'ToDo' and one is could "Closed out ToDos" - I simply put notes in the "ToDo" list and drag them out to "Closed Out" when I'm done. 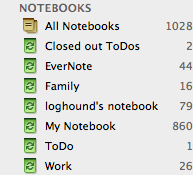 This is tremendous because notes in Evernote can contain Rich text, images, PDF's and any other sort of file so I can toss any any supporting items to my todo.   As I make progress on it I can also make notes on where I am and when it's closed I can archive it for posterity sake.

Since I have Evernote everywhere (phone, work, home and web) I can always get access to work on them or close them out.

The key to this working is I have Evernote open all the time anyway so it's not a new tool I need to get into -- It's the tool I already use.
John