Scanning Into Evernote with Image Capture

I've got a funny history with Evernote -- Around the time Microsoft came out with One Note, a small company started making something called Evernote.  I actually preferred Evernote over One note but in reality I didn't use either of them much because the data was stuck on one computer.

Since then I've gone through lots of these (Yojimbo, Circus Ponies Notebook, etc.) and while I love the concept I've always given up since my life is just too dynamic.

I spend a lot of time at work on a PC, then I come home to a Mac but on the road it's all iPhone baby.  With the amazingly good syncing of Evernote and the great native clients (not to mention the web) I've really started to rely on Evernote.

One thing I've started to do a lot of is scanning documents -- A typical use case is I'll be doing bills on a Sunday night and realize I need to call someone during business hours (say to get something corrected or ask a question).  I've started scanning the bill into Evernote, adding a few quick comments and add it to Evernote.

The sync in Evernote works so well that I don't even think about it anymore -- I just add it and forget about it.  Monday morning when I get to work the info is right there and I can make the call to fix the problem (and if it's complicated I can keep a running log of discussions in that note -- Since it includes the original bill I've got it all in one spot -- A lifesaver if you are dealing with insurance companies!)

The one thing that Didn't work as well as I would like was getting the scan into Evernote in the first place.  I would:

Fortunately there is a better way (in Snow Leopard anyway) -- It's also dead-easy to set up.  As a one time step step you have to select the 'scan to' drop down in image capture and navigate to the Applications directory and select Evernote.  It will then show up in the drop down (like iPhoto, preview & Mail do by default) -- It becomes a first class citizen in Image capture so you can scan directly into Evernote.  My work flow is now 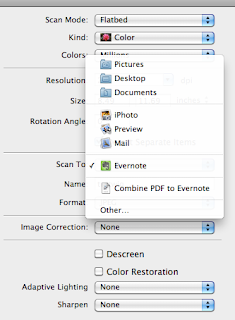